The poem “Trees” written by Joyce Kilmer, is proposing that trees are the most wonderful thing “no one but God can make a tree”. He wants people to appreciate nature and God. He uses personification to demonstrate that trees are wonderful as people. 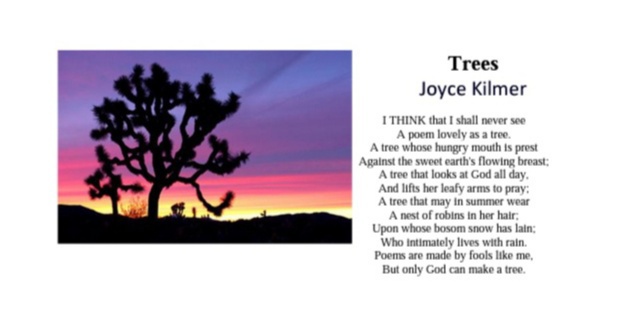 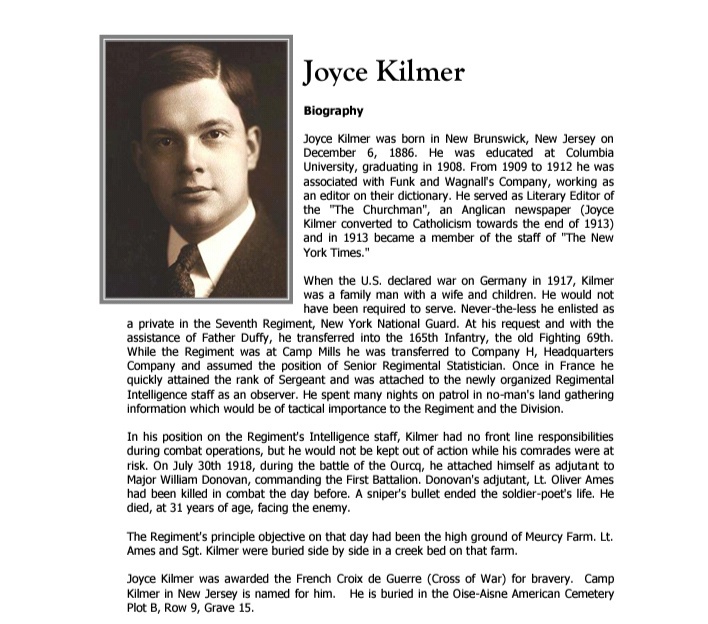 The poem Trees is an outstanding poem written by Joyce Kilmer. The “Trees” is one of the many poems written by him. His other beautiful poems are “Summer Love” and “Main Street”.

The trees obtain water and other nourishment from the soil which are inevitable for its survival. The poet has used a lot of imagery to make his point. The line “A tree whose hungry mouth is pressed” symbolises that the roots of the tree are anchored to the ground to obtain its sustenance. The poet says that the roots drink the “earth’s sweet flowing” that is the water which keeps the tree alive and fresh. In this way, the life of a tree relies on the earth, the same is true for human beings who also depend on the earth for its rich sources. The earth contains all the rich sources in abundance needed for survival. Thus, the earth sustains all living beings including the trees.

The trees are spread everywhere making the earth beautiful. They grow upwards. They appear as if they are looking towards God. The post poet also says the same thing, “A tree looks at God all day”. As the tree grows upwards it seems to be trying to realise God. In the next line, the poet says the tree ” lifts her leafy arms to pray” this symbolises that the different people on the earth are praying to God. The people pray and worship God for the abundant blessings that God bestows from the earth.

The post also praises the robustness of the tree. In severe winter the trunks of the tree usually remain covered with snow. The poet writes, “under whose bosom snow has lain”. Bosom alludes to the trunk of the tree. The trees are capable to bear the cold due to their robustness. The tree even thrives during the rains.

But only God can make a tree

In a deeper sense, it alludes the human cannot create things but discover or praise the created things of God.

READ ALSO:  Summary and Study Questions of We Real Cool by Gwendolyn Brooks

In the poem “Trees”, by Joyce Kilmer, the most common poetic device used in this poem is a personification, yet there’s two that really identify the writer’s thoughts of nature. One example of personification is, “A tree that looks at God all day”, which gives the tree the human capability of being able to “look” at its surroundings. The tree “looks at God” specifically, which suggests that trees and nature, in general, are transcendent and spiritual. The idea of “God” gives off a holy presence of divine power, therefore by mentioning that the tree looks to “God” suggests that trees and nature should be treated like they are divine and sacred forms, with similar respect to that of our own God. As well, another personified statement in the poem is that the tree, “may in summer wear a nest of robins in her hair”. The tree “wears” the nest of robins means that the tree homes the lives of robins which live and depend on the tree given that they’ve established their nest/home in the tree. This depicts how in nature life is created and nourished like that of the robins living in the tree, and nature is a place that is home to all types of life. Just how we look to our environment and daily lives as a community and home, nature provides that for many living beings within it. Nature is a home, a home which is both spiritual and deserving of respect.

Question: What ideas about Nature are conveyed in this poem? Choose one idea and explain how you came to that idea. Use quotes in your response.

READ ALSO:  The Lake Isle of Innisfree - Summary and Questions and Their Answers

In the poem “Trees”, by Joyce Kilmer, the author conveys the connection between God and his creations, in a form of a tree. He praises God’s power and ability to create such magnificent objects that outshines the other elements on this planet. The quote in line 6, “And lifts her heavy arms to pray,” represents a tree as a woman, who prays to God for creating such an enticement for the world to ponder. Furthermore, this poem reveals that beauty is outside the tree, but the roots are what give it the power. The author illustrates that nature which has been created by God himself is incomparable to other manmade objects. It can be inferred the poet is very religious and strongly believes in a supernatural entity known as God. Ultimately, the poem depicts nature is very powerful and enticing due to being a direct creation of God. Ajamil and the Tigers by Arun Kolatkar – Summary, Analysis and Questions Answers

Do not Ask of Me, My Love – Summary, Analysis, Theme and Solved Questions

Ode on Intimations of Immortality – Appreciation and Explanations

Epic Poetry: Some Features and Examples

I Know Why the Caged Bird Sings – Summary, Analysis, Question Answers and Theme

The Sunderbans by Susil Mandal – Summary, Analysis and Questions Answers

The Speed Master By Robert Frost – Summary and Analysis

Laugh And Be Merry Summary, Question Answers and Explanations

The Ant and the Cricket – Summary, Analysis and Questions and Answers