The Summer of The Beautiful White Horse By William Saroyan

In this post, you will get the summary of the story “The Summer of the Beautiful White Horse” and also learn about the author. Some of the questions about the story will be also discussed.

About the author
William Saroyan is an American Armenian author. He was born on August 31, 1908, in California to Armenian immigrants from Turkey. His father died when Saroyan was just three years old.

He and his siblings had to be put into an orphanage. Luckily five years later, they were reunited with their mother.

Even during hard times, Saroyan’s spirits were high. His writings often celebrated the joy of living in spite of poverty hunger and insecurity.

Though Saroyan had to leave school at 15, he educated himself by reading and writing. Later he continued his education on his own supporting himself by taking up odd jobs. Sorayan’s mother showed him some of his father’s writings which influenced his early writing.

Saroyan has worked strong autobiographical touch especially his later works. Some of his well-known works are Here Comes, There Goes, You Know Who (1961), Not Dying ( 1963 ), Days of Life and Death and Escaped to the Moon ( 1971) and Places Where I’ve Gone Time (1975).

In 1940 Saroyan refused the Pulitzer Prize for his play The Time of Your Life saying that it was no more great or good than anything else he had written. William Saroyan died on May 18, 1981, at the age of 73. 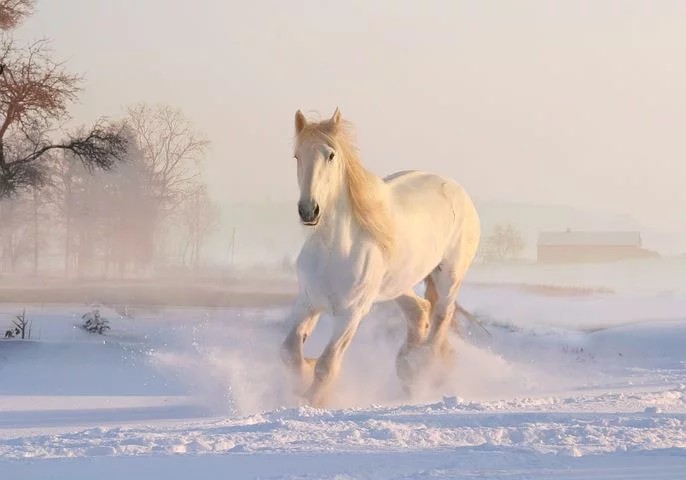 Summary of ” The Summer of the Beautiful White Horse”

The Summer of the Beautiful White Horse is a story of two Poor Boys from an Armenian tribe whose hallmarks are trust and honesty. One morning, the narrator, young Aram, is woken at dawn by his cousin Mourad, who arrives riding a beautiful white horse. Aram thinks that he was dreaming but soon joins his cousin for he loves horse riding as much as his cousin did.

Being aware that Mourad can’t afford the beautiful horse and also that no member of the Garoghlanian family could steal, Aram is perplexed.

Mourad convinces Aram that they would return the horse after they have enjoyed riding it and that this was different from stealing money.

Aram loves horses and so is very tempted to ride it. So after the initial moral dilemma, he joins Mourad and the two cousins spend a great time riding the handsome white horse.

The Story Goes On to describe in detail how the two boys indulge in the joy of horse riding early every morning for nearly a month hiding the horse in the barn of a deserted Vineyard.

One day, a farmer, John Byro, visits are Aram’s house and tells Aram’s uncle Khosrove how sad he is because his horse had been stolen last month. Unmoved Aram and Mourad continue with their horse riding.

Then again John Byro runs into the two boys riding his horse. His reaction on seeing it the conversation with the boys and the boys’ action is the turning point that makes the story end on a beautiful note.

1. Why was it difficult for Aram to believe the sight of his cousin Mourad with the beautiful white horse?
Ans: As Aram peeped through the window, he saw his cousin Mourad with a beautiful white horse and it was a sight that he found very hard to believe for two reasons: first, the whole Garoghlonian family to which the two boys belonged was extremely poor and thus Mourad could not afford that horse. Secondly, in that situation, it would mean Mourad had stolen the horse. But this was not possible either since the Garoghlonian family was very well known for their loyalty and so Mourad could not steal the horse either.

2. Where had Mourad been hiding the horse?
Answer: Mourad had concealed the horse in the barn of an abandoned vineyard belonging to a farmer called Fetvajian.

3. What did the farmer John Byro tell the two boys when one day they accidentally met him with his horse in their custody?
Answer: The farmer inspected the horse when he found it with the two boys one morning, and he told them he could swear that the horse was the very horse that had been stolen from him many weeks ago if he didn’t know about their parents. He added that their family’s reputation for integrity and honesty was well known to him and hence he liked to say that his stolen horse may be the twin.

READ ALSO:  20 Shakespeare Quotations To Celebrate The Birth of a Master

4. What did John Byro tell Aram’s mother and Uncle Khosrove when he got his horseback?
Answer: when one day John Byro suddenly got back his horse, he came to the house of Aram and told Aram’s mother and Uncle Khosrove that he did not know what to say about the whole matter. This was because the horse was stronger than ever and even nurtured better and he thanked God for that.

6. What points were put forward by Aram in defence of Mourad’s act of stealing the horse?
Answer: Aram reasoned to himself that stealing a horse for a ride was not the same thing as stealing something else, like money. And then he went a little ahead by suggesting that if you were so mad about horses like Mourad and like he was, it wasn’t cheating at all. Until they decided to sell the horse it would not become stealing and he was confident that they would never do the same.

7. Which excuses were given by Aram to himself for taking a ride on the horse despite knowing fully the truth about the theft of the horse by Mourad?
Ans: Aram dismissed stealing a horse on the ground that it was not as grave a crime as stealing money. Secondly, he claimed that if it was anything like a horse that he and his cousin were nuts about, it couldn’t be taken as theft. In fact, it wasn’t going to be stealing until they decided to sell the horse.

8. Why was Aram unwilling to return the horse so soon?
Ans: Aram was passionate about horse racing, so he decided to practice horse riding at all costs. The horse wouldn’t let him ride over it, so he wasn’t able to return the horse at least until he learned to ride it.

1. Why did the two boys ultimately return the horse all of a sudden although they had planned to keep it at least for six months?
Answer: While the two boys had intended to hold the horse for at least six months, they unexpectedly returned it the morning after they inadvertently encountered the farmer John Byro, from whom Mourad had stolen the horse. The farmer pointed at the horse and told them that he could swear that the horse was his own horse that had been taken from him many weeks ago because he didn’t care about his father. He added that his family’s reputation for integrity was well known to him, and he liked to suggest that the horse might be the twin of his stolen horse. What John Byro told them was an eye-opener for the two boys, especially Mourad, and they were mindful of how valuable and good their family’s reputation for integrity was, and so did not want to tarnish the image and credibility, and immediately returned the horse.

2. Mourad was the natural descendant of the crazy streak of uncle Khosrove. Explain the statement giving instances from the story, ‘The Summer of the Beautiful White Horse’
Ans: Uncle Khosrove was known to be one of the craziest people in the Garoghlanian tribe. It was often assumed that the tribe that Mourad was the natural descendant of the crazy streak of their group. The craziness of Uncle Khosrove was out of the universe. He had the biggest moustache in the region. His talk was not less than shouting, which was normal to him. When his son came running to warn him about his house on fire, he simply said,’ It’s no harm; don’t pay attention to it.’ The barber, who told him that it was his own home, also earned rebukes. Khosrove even told John Byro not to care about the horse or the lack of money or even the pain of his legs, but to react in the same way.

Mourad was assumed to be the natural descendant of this man, but not a biological descendant, mostly because of the psychotic actions he was engaged in. The act of robbing a horse when he was mad about it is an explanation to prove the same thing. As Uncle Khosrove’s punch line, i.e.’ It’s no harm; don’t pay attention to it,’ Mourad used to say that he had a way out of problems, creatures, and even men. Thus Mourad said that he had a way with the horse, with the pigs, and with the farmers.

Language and Nature of Language

Choice and Usage of Words For Article Writing