We Wear the Mask – Summary and Analysis

“We Wear the Mask” by Paul Laurence Dunbar is about African Americans. The poem highlights the human tendency to hide our true feelings and thoughts from those around us by putting up a facade what T.S. Eliot calls “the face to meet the faces that you meet” in “The Love Song of J. Alfred Prufrock.” Have you ever falsely answered “good” or “well” to someone who asked you how you were doing? In the poem, the speaker calls that facade a “mask.” 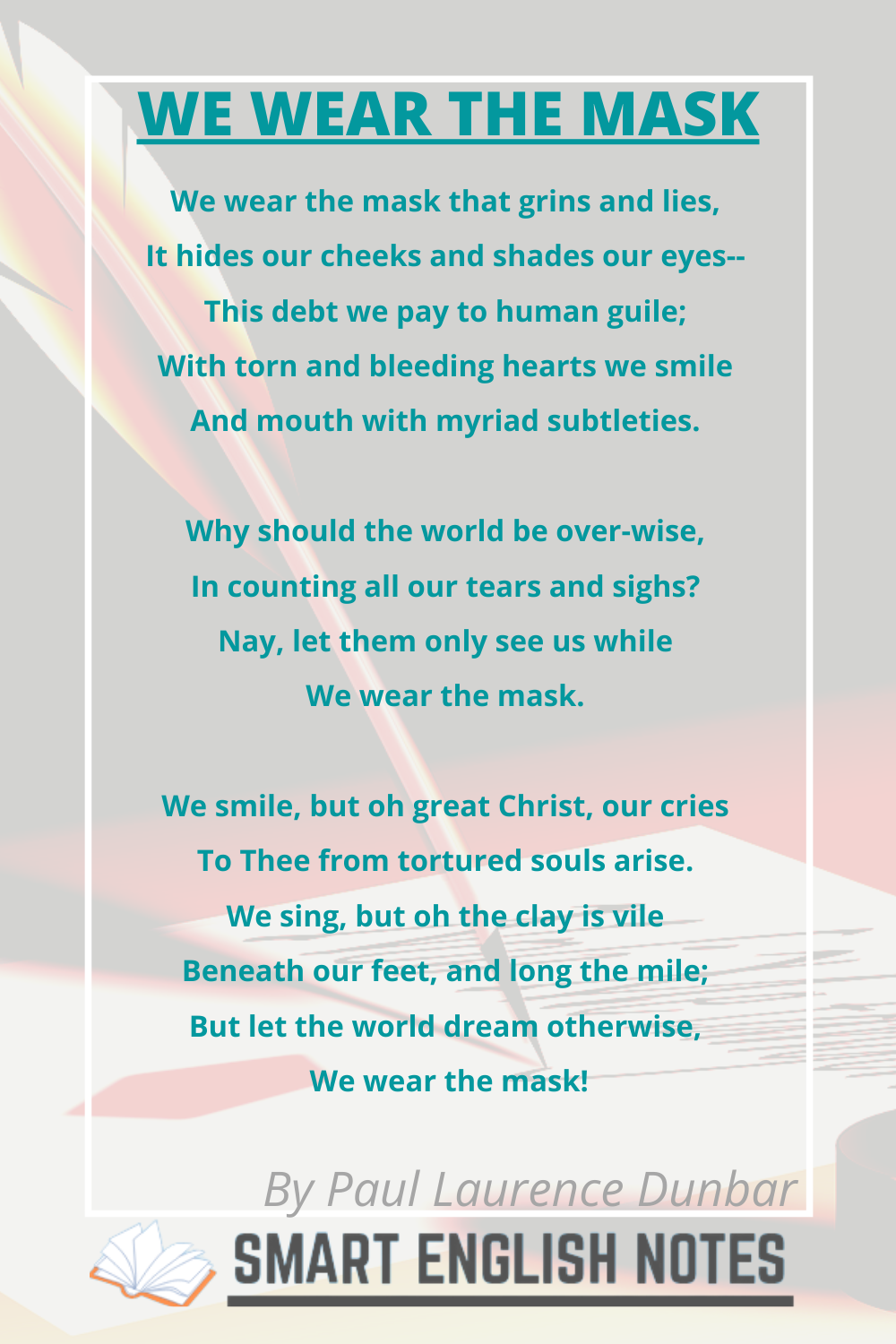 Dunbar was a Black poet writing in nineteenth-century America. He born just after Civil War and that his parents were slaves. It is safe to say that given this context, the words of the poem take on an additional meaning. At that time, although black men seemed free from slavery, people were still prejudiced and blacks were persecuted by white men. From his childhood to adulthood, Dunbar directly saw how white men treated and persecuted black men in every aspect, including working, civil rights, et cetera. When black men protested to white men about their rights, white men usually attacked them. Hence, Paul’s experience has a relationship with “we” in his “We Wear the Mask” because “we” are seriously oppressed and crucified, just like the black men that Paul saw in his life. In addition, black men are being harmed by white men when they express their true feelings, just like the “we” in this poem. Therefore, Dunbar’s background and experience are in connection with the “we” in the poem, just like the black men that he saw in his life – being oppressed and concealing their own feelings.

Blacks at that time often (if not usually) could not express the truth of their lives to whites without the threat of serious repercussions. Blacks had to put on a servile smile or else have their livelihoods (if not their lives) endangered. This poem highlights the suffering of Blacks who have much to complain about regarding their social plight but who cannot complain without making their own lives worse.

“We Wear the Mask” by Paul Laurence Dunbar is about African Americans who hide their true feelings by wearing a grin-a mask-on their face. “We wear the mask that grins and lies,” the poem says in the first line. Masks cannot grin or lie, so this is a personification. Dunbar says in the second line that the mask “shades [their] eyes.” Because eyes are windows to the soul, it makes sense for the mask to shade their eyes. People will be unable to see how the person is feeling if the mask covers their eyes. “This debt we pay to human guile,” the poem says in line three. This line is a reference to the slave trade. This line implies that the mask is a result of slavery.

Slavery in America started when African natives were duped into boarding foreign ships. The natives were then sold as slaves to American plantation owners. Slavery and bigotry prevented African Americans from expressing their true feelings. They just have to tuck it away inside and put on a brave face. Whether a slave expresses some emotion other than cooperation, he or she will be beaten. As a result of their fear of being disciplined, slaves and African Americans wear masks on their faces. “with torn and bleeding hearts we smile,” Dunbar writes in the fourth paragraph. The smile is a mask worn by African Americans to hide the pain they are experiencing. Line 5 says, “and mouth with myriad subtleties”. The subtleties Dunbar is referring to in this line could be when people curse under their breath as a result of the difficulties they are experiencing.

Dunbar becomes a little sarcastic in the second stanza. “Why should the world be overwise?” he asks. This question implies that if the world begins to care about the pains and grief that African Americans are experiencing, the world will be too wise. So, in order to keep the world from becoming “over wise,” they would continue to wear their masks.

In the last stanza, Dunbar says that even though they seem to be smiling on the outside, Jesus Christ knows the truth. The cries of their tortured souls can be heard by Christ. He can see right through the mask. “We sing, but oh the clay is vile beneath our feet, and long the mile,” it says in lines 12-13. Slaves will sing songs to pass the time and boost morale when working in the fields. As a result, people could be singing for better times to come in the future along these lines. They may even sing to convince themselves that wearing a mask all the time isn’t so bad. The clay may be a reference to the slaves’ work on the plantation property, which extends for miles.

READ ALSO:  Analysis of the Literary and Poetic Devices in “I Know Why the Caged Bird Sings”

In line 14, the poet says, “But let the world dream otherwise”. This means that, despite their many hardships, African Americans and slaves should pretend to the rest of the world that they are content, happy, and satisfied with their lives. The poem concludes with the phrase “we wear the mask,” emphasising the sufferings they kept to themselves as well as the show they have to put on for others.

The rhyme scheme of this poem is AABBCDABFAABBDF.

# Text and Summary of We Wear the Mask

Fire and Ice – Summary, Explanation and Questions and Answers

Critical Appreciation and Theme of After Blenheim

The Retreat by Henry Vaughan – Summary and Questions

Summary and Theme of the poem ‘Dreams’ by Langston Hughes

Inklings From The Dark

To My Sister By Wordsworth Summary, Analysis and Solved Questions